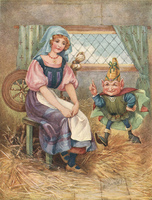 Summary of the Fairy Tale:
A miller hopes to bring himself and his daughter out of poverty, and tells the king that his daughter can spin straw into gold.  The  king was in disbelief and decided to test the millers daughter.  The next day the miller's daughter was place in a room full of straw.  The girl begins to cry because she cannot actually turn straw in to gold.  Suddenly a little goblin like creature appears in the room and decides to make a bargain with the women.  The creature wanted the girls necklace in exchange for all of the straw in the room to be turned into gold.  The king is astonished that the girl could do this and decides to send her into an even bigger room of straw.  The girl again begins to cry and then the creature appears again to cut another deal with her.  The creature now wanted the ring that she was wearing and the girl agree's to the deal.  The king returns and all of the straw was turned to gold again.  The king decides to test her one more time with even more straw than the last time to determine if she would become the new queen.  The girl begins to cry once more and the creature returned to cut another deal.  The final deal was if the creature spins this last batch of straw into gold then the creature would get the girls firstborn child when she married the king.  The girl ultimately agree's to the creatures request.  The creature spins the last batch of straw into gold and the girl became the queen.  One year later the queens baby was born and the creature returned to claim his part of the deal.  The queen refuses to give up her baby and the creature said that if she guessed his name within the next three days she could keep her baby.   The first two days the queen couldn't guess the creatures name.  The last night before the last day one of the queens messengers came up upon the creature dancing around the fire shouting his name.  The messenger returns to the castle to tell the queen.  On the final day the creature appeared and the queen started guessing names and eventually got to his name which was Rumpelstiltskin.  The creature was full of anger and started to kick his right foot into the ground and eventually got it stuck.  Rumpelstiltskin tried to use his left foot to pull the other one out and in the process the creature was torn in half causing him to disappear 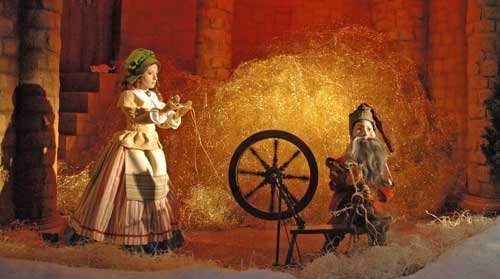